The Central Kalahari Game Reserve is the second largest protected wildlife area in the world, covering 51 800 square kilometres. It is one of the most remote and unspoilt parts of Africa. The desert’s beauty is uncompromisingly harsh but utterly breathtaking and has captured the imagination of explorers for centuries. The Kalahari is characterised by vast open spaces, endless horizons, rolling golden grasslands and flaming sunrises and sunsets. Within this remote expansive landscape there is a rich diversity of life. The Central Kalahari is home to numerous unique desert dwelling species, each with their own remarkable adaptation to survive the parched landscape.

The summer rain transforms this desolate landscape into a thriving paradise teeming with springbok and gemsbok, closely followed by hungry predators. The Kalahari is at its most beautiful following the rains, boasting beautiful summer skies and a blanket of wild flowers, not to mention that many of the desert species drop their young at this time of year. Generally in the desert you do not see large herds of game, rather a variety of desert adapted species in smaller numbers. Herds of oryx and springbok make up much of the wildlife here with smaller groups of red hartebeest, eland, blue wildebeest, southern giraffe and greater kudu. Predators include lion, leopard, cheetah, wild dog (rare), spotted hyaena, brown hyaena, caracal, African wildcat, black-backed jackal, bat-eared fox and Cape fox. During the winter months, the traditional yellows and greys of the Kalahari landscape dominate. It is a time of harsh and arid beauty when one can truly understand the incredible adaptations made by a multitude of species in order to survive. At this time, the larger herds disperse into smaller groups as they spread out into the desert seeking out grazing or browsing. 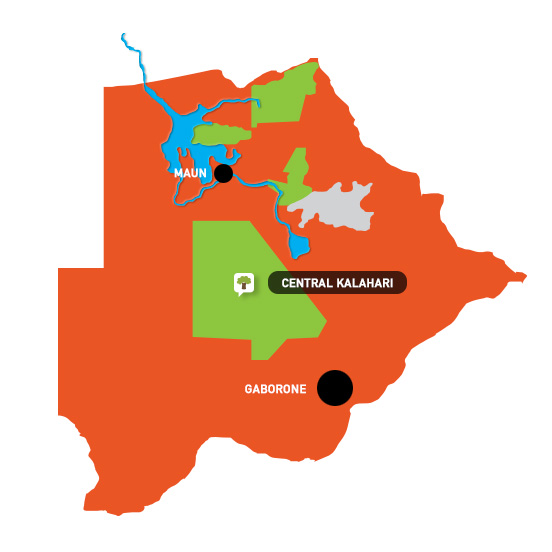 Tau Pan is the first permanent camp inside the Central Kalahari Game Reserve (CKGR), famous for its breath taking night skies and amazing scenery and cloud formations. Tau Pan Camp is situated on the edge of the beautiful Tau Pan and commands stunning views of the permanent Tau Pan water hole and the endless Kalahari horizon.

Activities include game drives in open 4×4 vehicles, stargazing and guided walks with a San bushman who will explain and entertain you by answering all your questions from birth to marriage to bush survival. A truly magical place.

Situated on an immense pan, Kalahari Plains Camp lies in a remote part of the Central Kalahari Game Reserve, a place famed for its outstanding wildlife with vast herds of antelope followed by abundant predators – including the legendary black-maned Kalahari lions and lively honey badgers. This region also offers some of the best summer wildlife viewing in Africa. Kalahari

Plains comprises eight en-suite canvas units (including one family unit) each with a sleep-out area from which to enjoy the beautiful night skies. The camp is raised off the ground to catch the breeze and take in the sweeping, spacious views across the Kalahari. Guided game drives unlock the wildlife treasures found here, and authentic San Bushman experiences provide insights into the unique culture of this people, their skills and way of life.

Mobile tented safaris are for true nature enthusiasts who want to enjoy the more authentic experience, once enjoyed by Africa’s first explorers. Only, this time around you have a team of professionals that do all the catering for you, allowing you time to soak up and enjoy the natural world without breaking any sweat performing camp duties. Mobile tented safaris allow you to explore nature up close, while camping in the pristine areas away from the madding crowds.

Nothing prepares you for the immensity of this reserve, nor its wild, mysterious beauty. There is the immediate impression of unending space, and having the entire reserve to yourself.